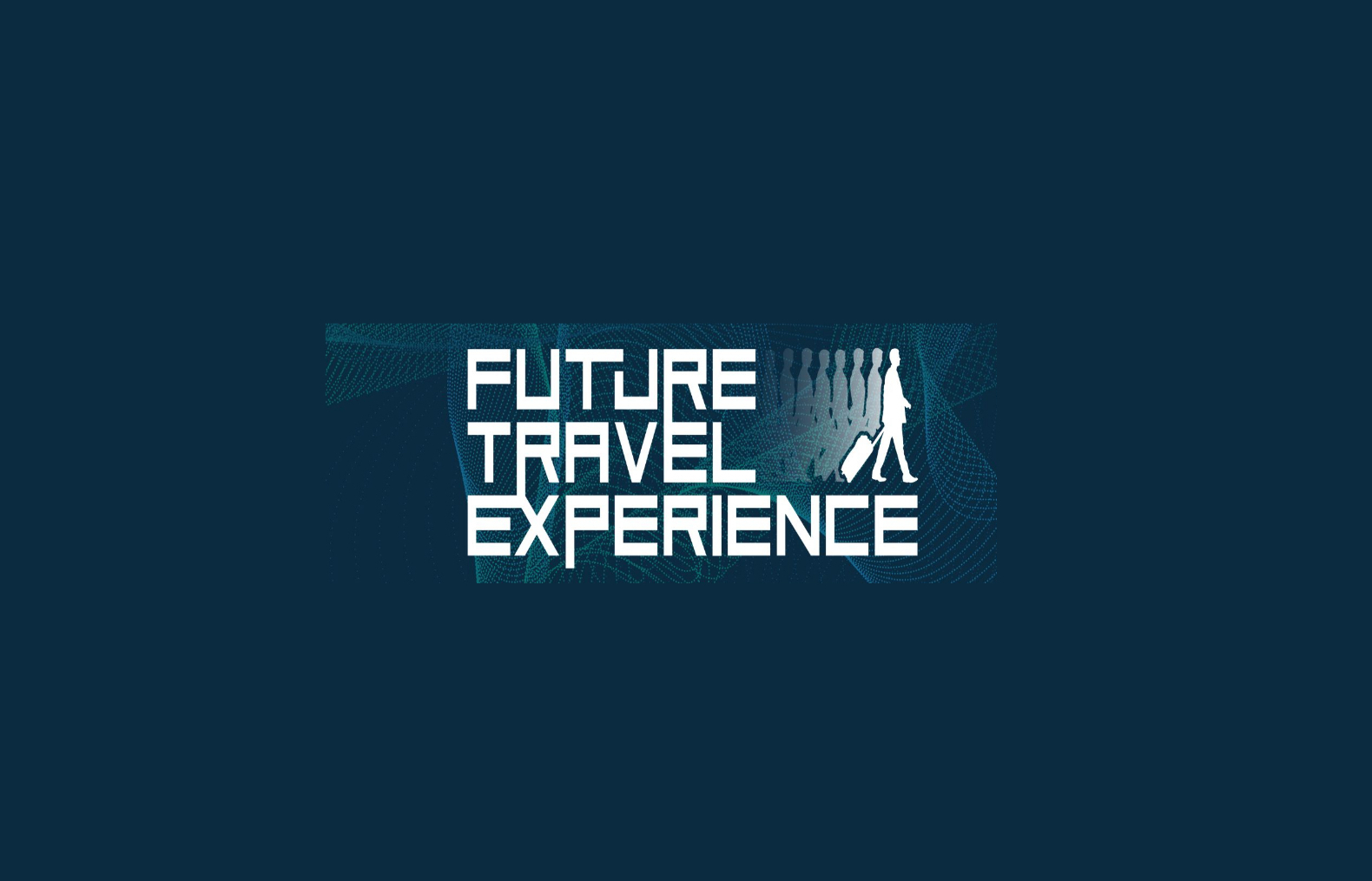 Hello there and welcome to UCPlaces. We are here at the Future Travel Experience Expo in Las Vegas! If you are taking this tour, clearly you are looking for a new way to add value to your marketing strategy, and offer one-of-a kind experiences to your customers. Using the UCPlaces platform, companies create meaningful real-life tour experiences that provide fun, educational and economical value for their customers. These tours are powerful advertisements that customers actually enjoy, pay attention to, and remember. Let’s begin by walking out of the Aria Hotel main entrance. It’s on the east side of the building, facing South Las Vegas Blvd. If you see a fountain, you are in the correct place. Take the sidewalk on the left side of West Aria Place while I give you some important information about the tour and about UCPlaces. Let’s see how it works. So right now you are in the intro section of this UCPlaces tour. Here you can introduce your company and make an instant connection with your customer. For example, if your company was UCP-Air, it could sound something like this: “Hi! This is Ron Jones, Director of UCP-Air. I just wanted to drop in and thank you for choosing to fly with us. We love our UCP-Air customers and are committed to providing that one-of-a-kind travel experience that you deserve. UCP-Air has been flying around the globe since 1985, providing top quality service to our customers. Now, please enjoy this tour of West Aria Place, Las Vegas as our gift to you. Here’s Shelly to show you around.” Hey thanks Ron! Let’s check this place out! Please meet me on the sidewalk in front of the Stella McCartney Boutique and let’s explore! So now your customer will follow the GPS to the 1st stop of the tour. Go ahead, do it - give it a try! See what your customers will experience! 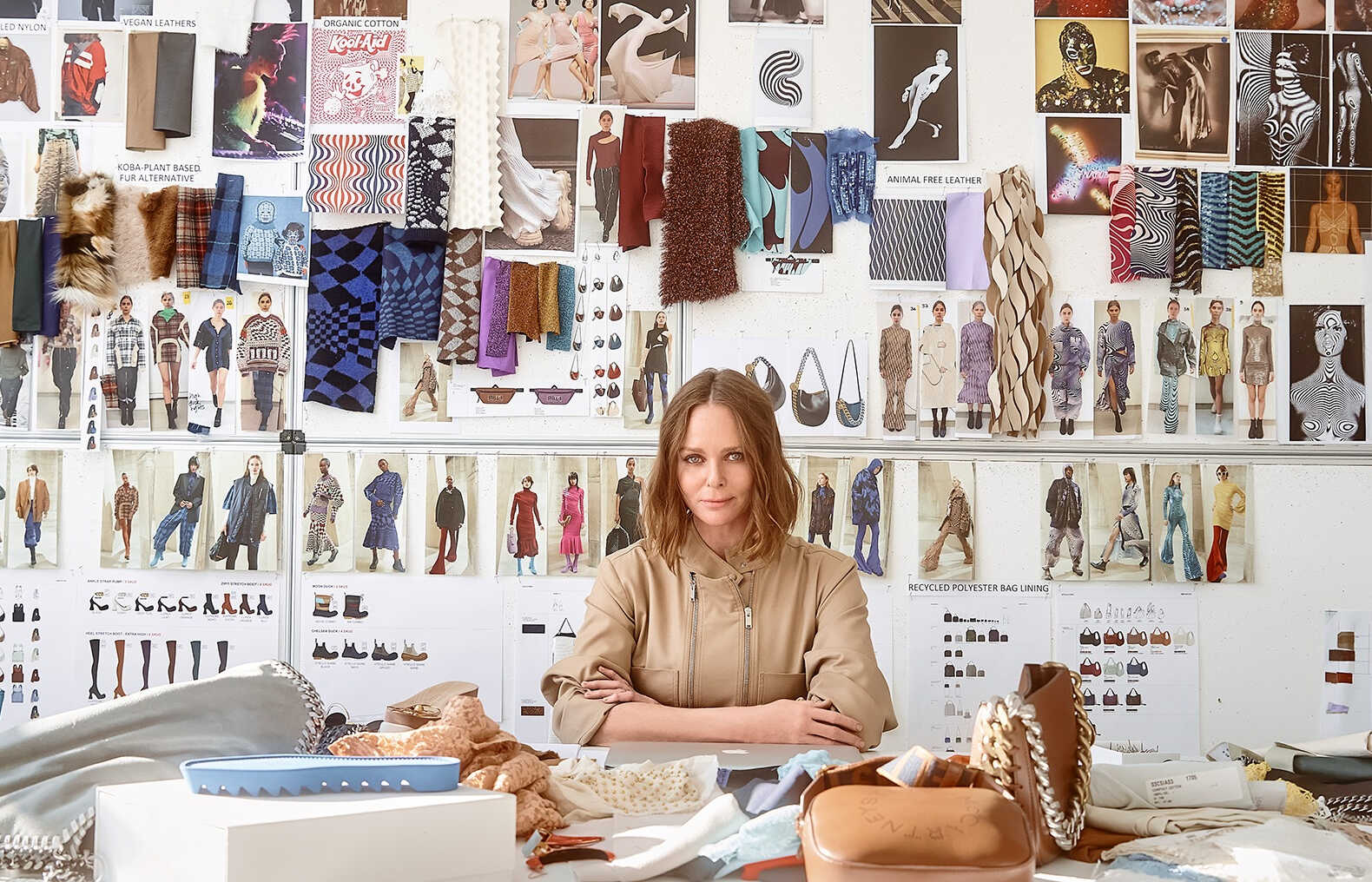 Welcome to the Stella McCartney Boutique! If the last name sounds familiar - yes, she is the daughter of Sir Paul McCartney. But that isn’t why she is famous. Stella is a successful and phenomenal fashion designer. She operates 51 stores from West Hollywood, to London to Paris, Milan, Beijing, and plenty of places in between. As a staunch supporter of animal rights and environmentalism, the Stella McCartney fashion line is famous for using earth-friendly and animal-free materials in her designs. Stella also has an A-to-Z Manifesto which would be 26 statements starting with Accountability and ending with Zero Waste. You can read the entire manifesto on the Stella McCartney website. Are you ready to continue? Just keep walking down the sidewalk away from the Aria Hotel.

The Shops at Crystals 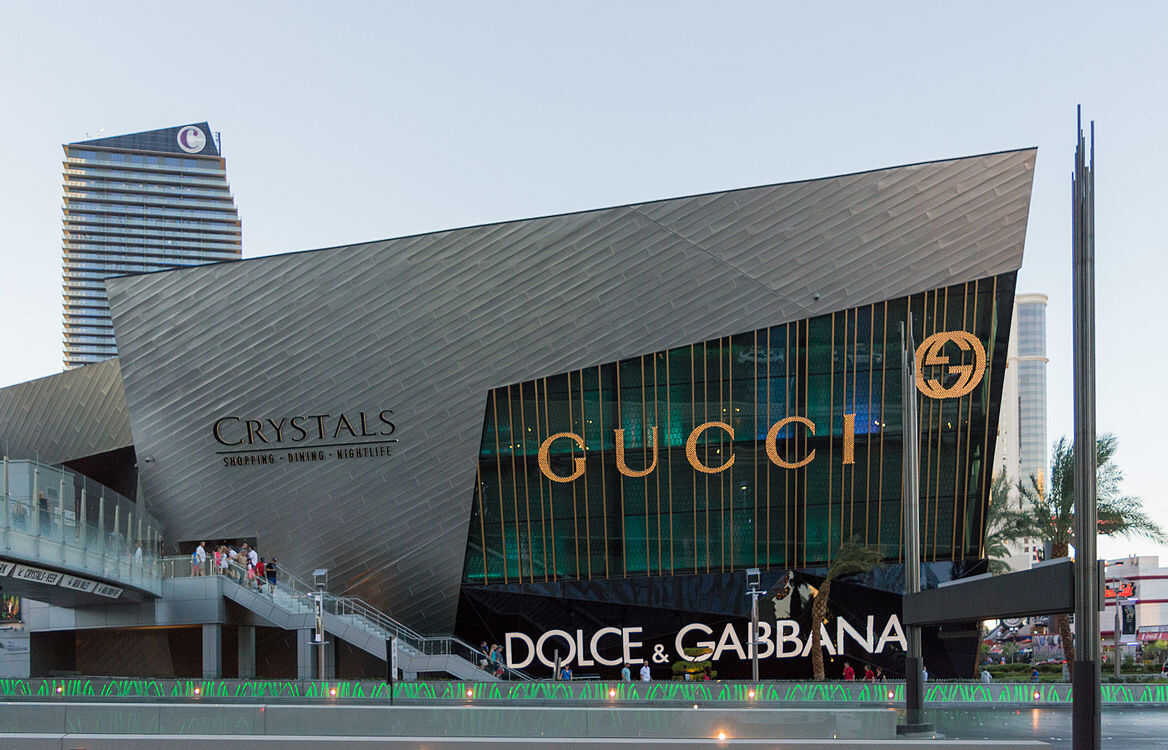 Do you have some loose change burning a hole in your pocket? Well, save that for later. Do you have a credit card with some healthy available credit? Or do you just enjoy window shopping? Well, the Shops at Crystals is chock-full of the finest stores selling the finest luxury brands in the world. Gucci, Prada, Versace, Tiffany and Company, Louis Vuitton. How’s that for some name-dropping? The Shops at Crystals hosts a highly curated collection of affluence, extravagance and luxury, right in one convenient spot. Go on in and spend a fortune, or save a fortune by just looking. Also, and I think this is pretty awesome, on the first floor here is the Barbie Cultural Icon Exhibition. Go see the very first Barbie doll from 1959 and journey through the decades of Barbie and the world around her. Enjoy seeing 150 vintage Barbie dolls and everything that goes with it. Does that sound fun? Great! I want to take you on more of the tour though, so can you wait until a little later to “shop til you drop?” Thanks. There’s a bridge above us that you need to cross and the steps are on the other side of the bridge. Find them, climb them, then meet me on the other side of that bridge. There you will find stairs to your left. Please take them and head toward Las Vegas Blvd. Thanks! 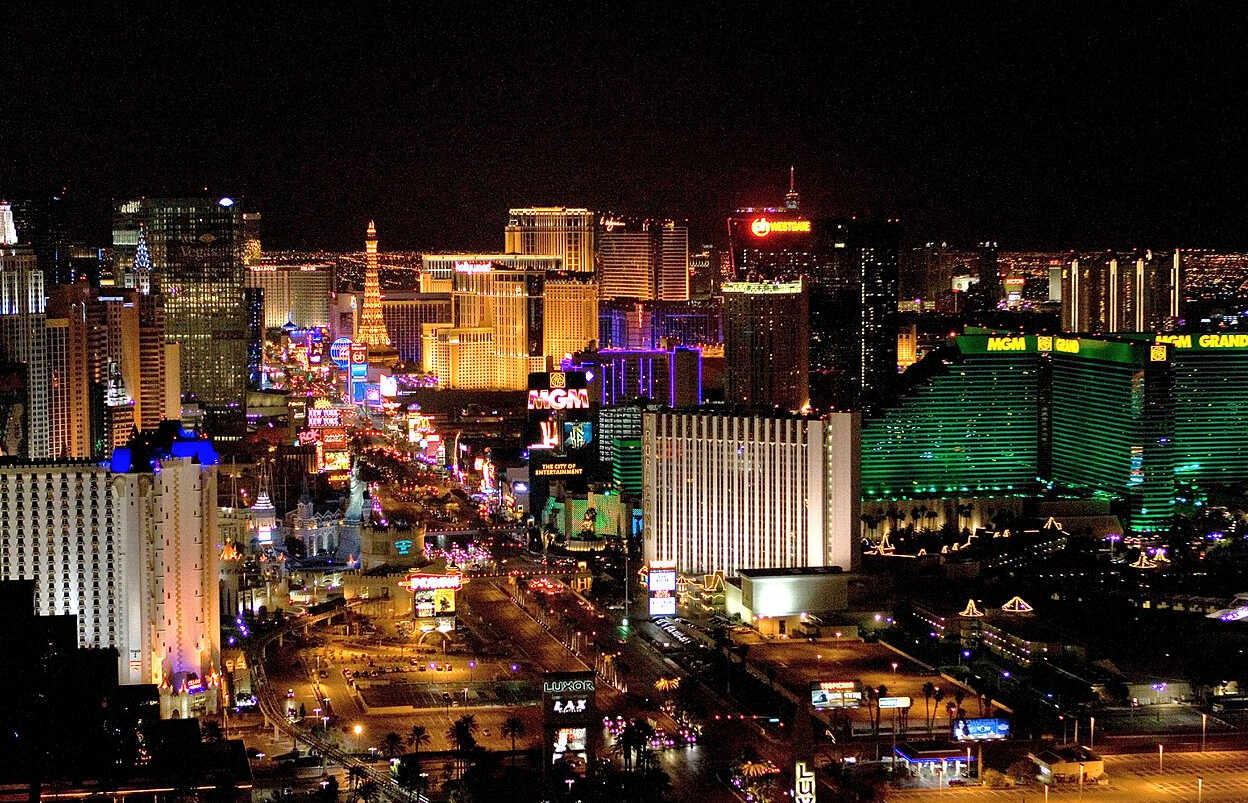 Crossing over bridges is much easier than waiting for traffic lights, isn’t it? Now, Starbucks is up ahead at the corner so if you are looking for a pick-me-up, now is the time. Enjoy a chino of some sort as I tell you some of the little-known history of the area. So, “Las Vegas” actually means “the meadows” in Spanish. There aren’t a lot of meadows to see from here, but when Las Vegas was settled in 1905, the valley had several artesian wells surrounded by lush, green areas. Move forward a few years and in 1910, Nevada became the last western state to outlaw gambling. You couldn’t even flip a coin to decide the price of a drink without getting in trouble with the law. So how did the casinos happen? Well in 1930, work began to construct the Hoover Dam. This brought the Las Vegas population up from 5,000 to 25,000 with most of the new residents being young male workers. Enter - The Mafia. Mafia crime lords and Las Vegas business owners joined forces to develop the quite profitable illegal gambling industry. Quickly enough, the Nevada State Legislature realized the opportunity here to grab a piece of this pie and they legalized local gambling and taxed it . Let’s jump forward another 30-ish years where Howard Hughes arrived on the scene. He was an Aviation hero and a rich entrepreneur. He moved to Las Vegas and stayed in the Desert Inn. Then he refused to check out of his room and decided to just buy the entire hotel. He didn’t stop there though. He spent around 300 million dollars purchasing hotels that were connected to organized crime and eventually helped change the Las Vegas image from Wild West to Cosmopolitan. Fast forward again. The 70’s and 80’s saw a massive population explosion and in 1989 Las Vegas entered into what’s known as the megaresort era. With large corporations instead of the Mafia now owning the hotels, casinos and nightclubs, Las Vegas became more family oriented with their all-inclusive resorts such as Mandalay Bay, Excalibur and MGM Grand. So, there’s your short Las Vegas history lesson. Take all of that information to your next trivia night! Let’s get you back to the Aria Hotel now, with a pit stop along the way at the Elena Bulatova Fine Art Collection. I’m gonna make you go back up those stairs though. You are ok with that, right? Good. Take the stairs up and then instead of taking the bridge, just continue toward the hotel. See ya soon! 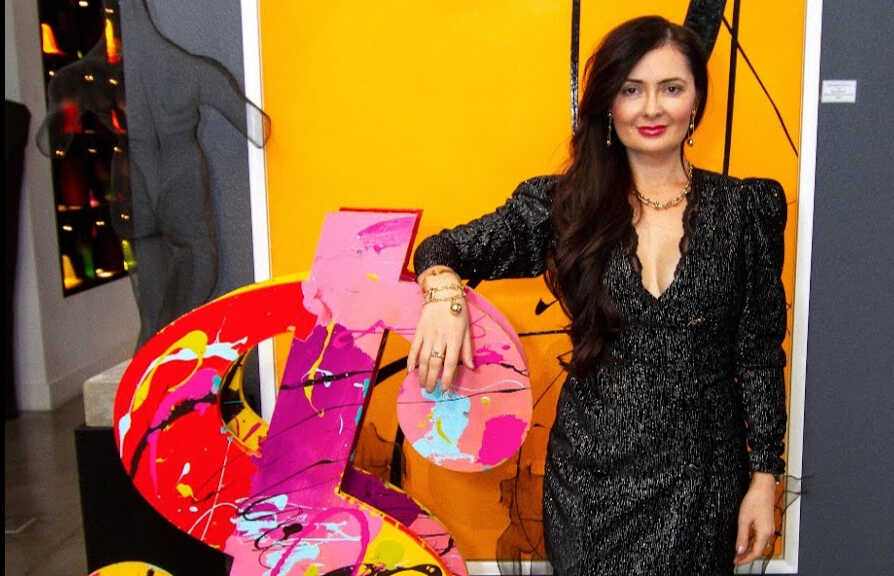 Prepare to get artsy! Elena Bulatova Fine Arts is up on your left. Elena was born in Russia but now lives in Palm Springs, California. She has loved the arts her whole life starting with choir, violin and piano. She graduated with honors from Moscow University and then accepted a fellowship to Yale University. Elena has since become a popular and talented painter along with a curator of ridiculously phenomenal art. Lucky you, one of her many galleries is right here just waiting for you to stroll in and be enamored by the colors, cultures, emotions and just plain fun that you will find inside. I could tell you about it, but experiencing it takes art to a whole new level. And just like that we are done with the West Aria Place, Las Vegas Tour! I hope you enjoyed exploring as much as I enjoyed showing you around. Just so you know, UCP-Air flies all over the world, so when you get home from this journey, get your calendar out and plan the next one! We are here for you! So that’s that! That’s how it works. Simple, fun and effective! Again, UCPlaces tours are powerful advertisements that customers actually enjoy, pay attention to, and remember. Are you ready to get started? Awesome. Send me an email at shelly@ucplaces.com and let’s goooooo!